Harshavardhan Rane is an Indian actor who is an telugu movie actor who was born in Rajahmundry, Andhra Pradesh. Harshvardhan made his debut as an actor in Telugu movie “Thakita Thakita” which was released in 2010. He won the heart of many viewers by his performance in this movie. After seeing his performance he was later signed in movies like Avunu, Naa Ishtam, Prema Ishq Kaadhal, Anaamika and many more.

Harshvardhan Rane was born on 16th December 1983 in Rajahmundry, Andhra Pradesh. He has passion of acting and movies during his childhood days. He has completed his degree in acting from Barry John Acting Studio which is located in delhi. After completing his degree from school he start to work in theatre plays. Performing in several theater play he got chance to work in TV serial “Left Right Left” in 2008. Later he was signed in Telugu movie Thakita Thakita from where his career begin to shine. 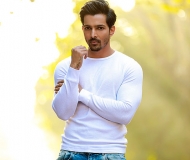