Sharma has appeared in critically and commercially successful Hindi films such as Khosla Ka Ghosla, Ishqiya, No One Killed Jessica, Chillar Party, The Dirty Picture, Luv Shuv Tey Chicken Khurana, Special 26 and B.A. Pass. He began his film career in 1996 with an appearance in Maachis before acting in several Bengali films in the early 2000s.

Rajesh Sharma is an actor and was an alumni of National School Of Drama New Delhi, known for Bajrangi Bhaijaan (2015), Special 26 (2013) and The Dirty Picture (2011). He has been married to Sangeeta Sharma since 2011. He was previously married to Sudiptaa Chakraborty. 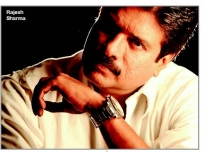